Watch our video on What is Computer? – Click Here

When we look around us we see various things. Some of them are natural and some of them are man-made. For e.g. the sun, lakes, mountains, trees, animals and birds are all natural things. Man made things include buildings, furniture, clothes, books and machines like cars and computers. Let’s understand what machines are:

Machines are made by man and they make our work easy. Then they used steam to make steam engines and gas to make vehicles like cars.

Once electricity was discovered, it led to making many more machines such as TVs, computers and smart phones. A computer is also an electronic machine which is made by man. It can take in instructions to carry out any arithmetic or logical operations. There are many different types of computers today, such as Desktop or personal computers, laptops, tablets and mobile phones, smart watches. They are differentiated based upon their size, speed or computing and storage power. First is Monitor, which looks like a TV screen, it displays the work done on the computer and comes in different shapes and sizes. You can use it to browse the internet, watch movies, play games and much more. A keyboard is a flat rectangular board with many buttons on it. These buttons are also called as keys. It is used to type in text, characters, numbers and other commands into the computer.

A typical standard keyboard has English letters on it, but you also get keyboard with Hindi letters and other languages as well. Computers also have a mouse which is a small device that is held by hand and used to control the screen pointer or cursor. It has two or three buttons to draw and play games on the computer. 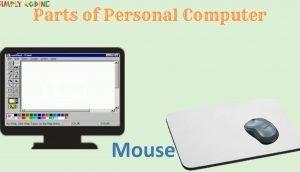 Then there is CPU box to which monitor, keyboard and mouse are all connected. Inside the CPU box are many components which make the computer work. The key component is CPU which is the brain of the computer. The full form of CPU is central processing unit. It helps to control other parts of computer.

A computer might also have speakers attached to it which are used to listen to sounds or songs on the computer. It might also have microphone which is used to record music or your voice.

Most homes today also have modem to connect to internet.